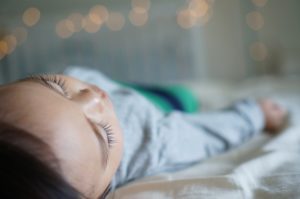 Today I want to talk about a really popular question that I get asked, and that is, “My baby is falling asleep fine at bedtime, but still having night wake-ups.” I want to look at a couple reasons why this might be happening and what you can do to fix it. First of all, and I always ask, “What’s going at at bedtime?” I first need to know, “Is your baby falling asleep independently at bedtime?”

Bedtime is the first place to look. It’s the first place where a child learns great sleep skills and then we can start expecting them to transfer that to the rest of the night. If your baby is not falling asleep independently at bedtime then that’s why you’re having night wake-ups. Plain and simple, right? Even if it only takes you two minutes to rock her to sleep and put her down she’s going to expect you to rock her at least once, maybe more, through the night. Getting a baby sleeping independently at bedtime absolutely has to be the first thing you do. Let’s say you’ve done that. I get a lot of people who have used the Sleep Sense Program. They say, “Yeah, she’s got it, she’s going down really well, independently, no props but, she’s still having one or two night wakings.”

In that case, good for you, that’s awesome. You’ve really conquered the biggest hurdle now we just have her apply this to the rest of the night. What can happen sometimes with babies, and this usually is around food, so they’re still getting a night feed or having a bottle, they’ll become habitual nighttime eaters. Meaning, that she’s 8 months or 10 months and she doesn’t really require it for calorie needs. She’s just doing it out of habit. I use the story of if my husband was there with my favorite meal at 3 o’clock in the morning, I would, most likely, sit up and eat every bite of it. If he did it again the next night, I’d do the same thing. If he did it for a week-long, I’d be waking up on cue to get my meal, and it would become a habit, right?

I don’t need to eat at 3:00 am. I certainly shouldn’t be eating at 3:00 am, but I would if it was there and it was being offered, so that can be the case. The bad news around that is that the only way to break this habit is to stop offering the feed. Again, always check with your doctor. There needs to be good weight and no issues. You know all that, right? If we’re talking about an 8 month old, or a 10 month old, even a 7 month old, and that’s still the case, then it maybe just habitual and you’ll have to pull it. The good news is, because they have such great sleep skills at bedtime, they will start transferring those skills to the night, once that you make it clear that they have to.

It really should only take, I would say, between one and three nights to get this baby sleeping all the way through without the feed. Might it be a rocky night or two? Sure, because she has an expectation and that’s not being met anymore, so, yes, they’ll be a little bit of push back on her end, but good news being, that those skills are there and she’s going to start applying them to the rest of the night. It can be the same with any kind of moderate prop dependency in the middle of then night. Maybe she’s falling asleep independently at bedtime, but now in the middle of the night she requires a visit from you or a cuddle from you, and that’s the same thing. She’s fallen into a bit of a habit around this and the only way to change it is to break the habit. Again, remembering that she’s got those great sleep skills. All right, so I hope that helps you, and I hope that you get your baby sleeping soundly through the night, now that you’ve got bedtime conquered.

Thanks so much. Sleep well.